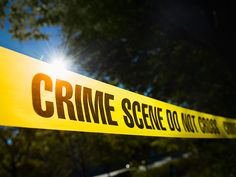 The investigations division consists of one detective sergeant, one detective corporal, four sworn officers, one evidence technician, and one administrative assistant. Because the different types of crimes require some specialties to investigate, the division is separated into five sections:

The investigation division also works with other local, State, and Federal Law Enforcement Agencies. Another responsibility of the investigations division is handling and investigating any complaints filed against members of the Police Department.

The administrative assistant provides support to each section by collecting, organizing, and disseminating information on suspected criminal activity. She also manages the HIDTA Grant.

While every member of the Division has their own area of expertise, they work together on major investigations, each contributing their knowledge, training, and experience to identify persons responsible for committing crimes, locating witnesses, locating and retrieving evidence, and apprehending suspects.

This division does presentations on a variety of informational topics, for more information see the GRPD Programs page. 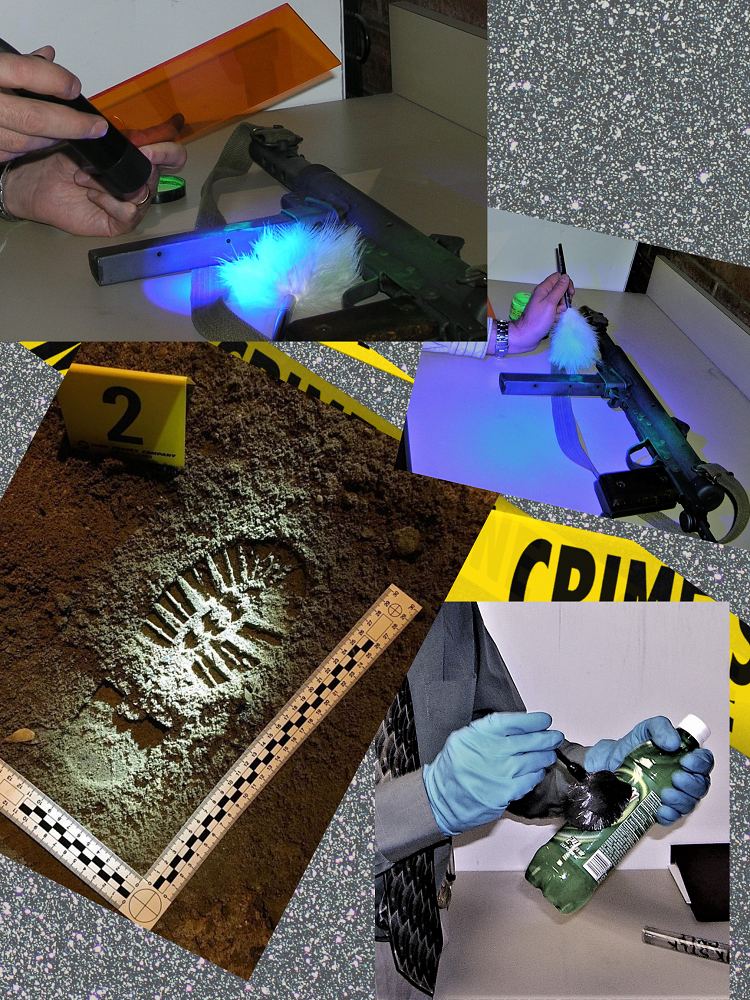 This division is supervised by the Detective Sergeant and Detective Corporal who also assist in supervising the other sections in the Investigative Division. This section consists of two investigators whose primary responsibilities include:

The majority of the detectives time is spent on investigating burglaries, larcenies, assaults, fraud, forgery, identity theft, sexual assaults. They work with other local law enforcement agencies to locate suspects who are responsible for committing crimes in this area.

If you have information about any crime that has occurred in Green River call dispatch at 307-875-1400 or submit a tip at Crime Stoppers. 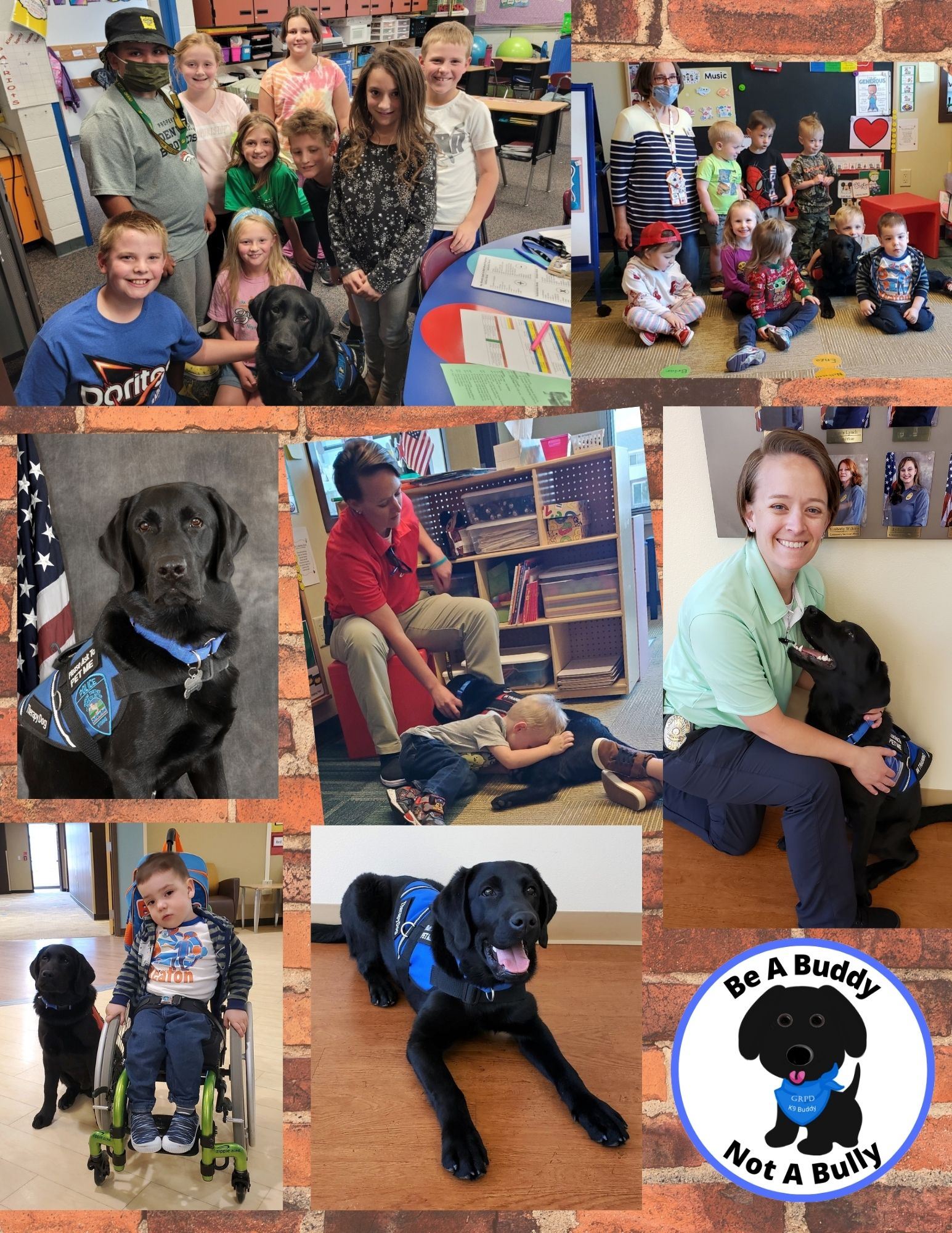 The Juvenile Detective is responsible for investigating crimes against children. They work closely with Detectives from the other sections, Sweetwater County School District 2, Department of Family Services, Southwest Counseling, and the County Attorney's Office. This Detective sits on various boards to help determine the appropriate course of action for youthful offenders and for victims of crimes.

Having a therapy dog will assist in interviews during the rapport-building phase, reducing the child’s anxiety and increasing truthful disclosures of abuse.

Sweetwater County School District #2 facilitates many programs for the youth in our community. Several schools, within the district, assist children with special needs. These needs include, both verbal and non-verbal autism, ADHD, depression, anxiety, and learning delays.

“Having previously worked as a School Resource Officer, I had the opportunity to experience working with children who were trigged and in crisis. Although I was able to externally distract children, I was never able to calm down their internal feelings.”

Our therapy canine can respond to our schools and safely assist in calming children down. When children are trigged, their education is disrupted and the use of coping skills are very limited. A therapy canine will assist in reducing internal struggles, allowing school staff to implement coping skills and return the child back into their learning environments.

“I feel this program will be very beneficial, and that is why I have been so passionate about implementing this program.” 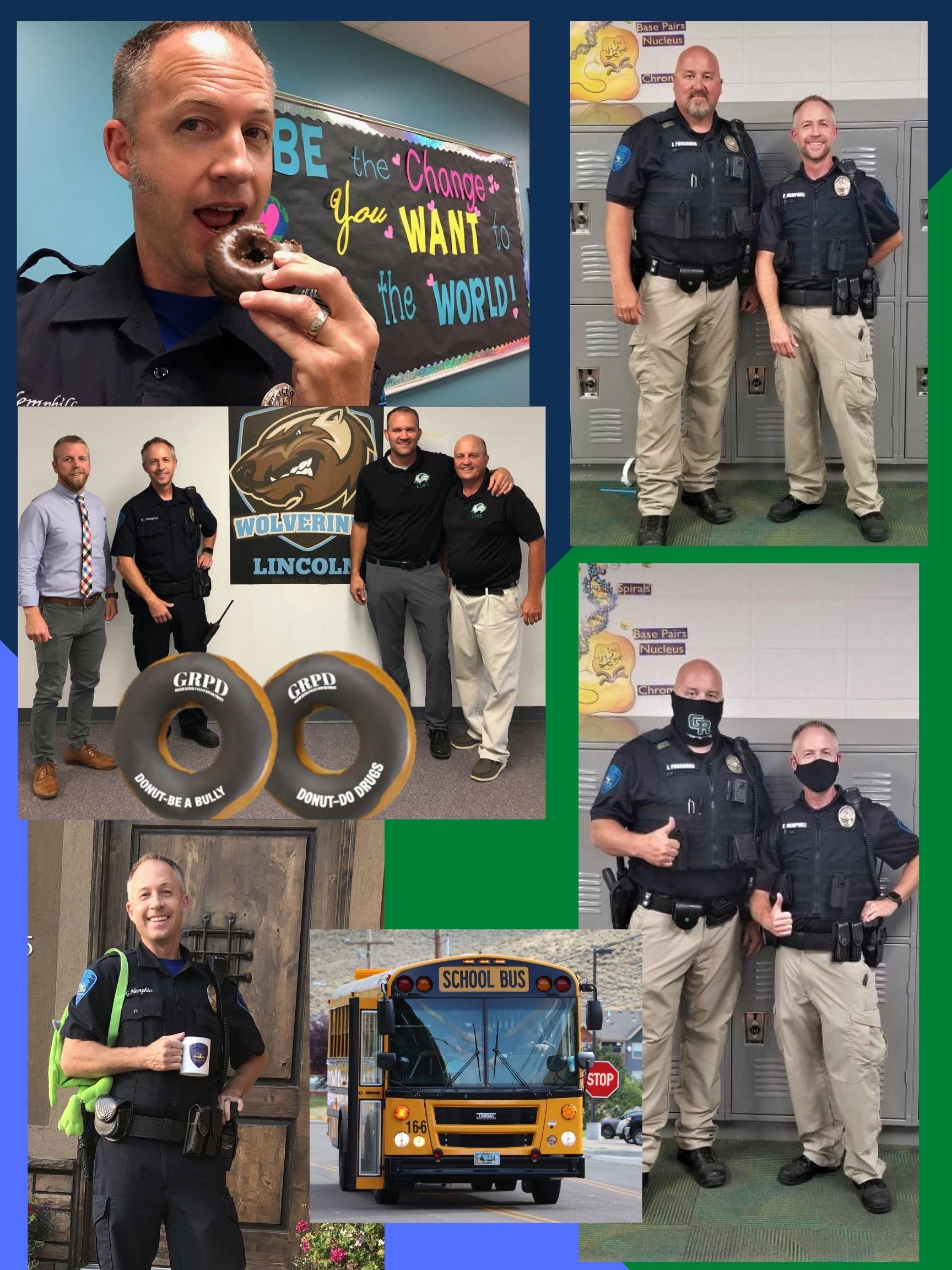 The goal of the School Resource Officer (SRO) program is to protect students and reduce the incidences of juvenile crime and delinquency. SRO's strive to provide a safe, secure environment for the teachers to teach in and the students to learn in.

The Green River Police Department and the Sweetwater County School District II work together to provide two SRO's in our schools. They work with students, faculties, parents, and administrators to immediately address and resolve problems and to establish and promote a positive relationship between the youth, the schools and the police.

They provide in the classroom and out of classroom instruction on a variety of topics for students, facilities, and parents to achieve those goals. They conduct investigations of crimes that occur on school property and enforce local and state laws. They interact with students during/after school hours at school-sponsored events.

The SRO program is currently comprised of two officers who provide services to all the schools in the district. Their offices are located; one at the Green River High School, one at Lincoln Intermediate School. They also provide services on a call-by-call basis to all other schools in the district and visit each school in the City on a regular basis and are familiar with the staffs in each school and many of the students.

K9 Searches: The school district and the Police K9 officers work together and schedules monthly random K9 searches of the schools for drugs and paraphernalia.

The SRO Program operates on limited funds and relies on local business donations to be able to implement the programs for the students. Some of those programs include: 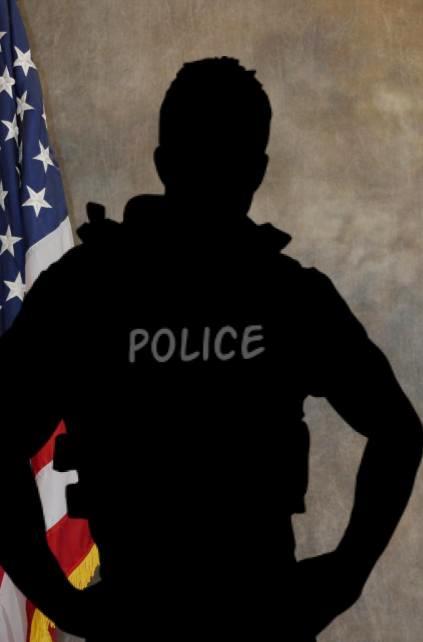 The Investigation Unit currently has two investigators assigned to the Wyoming Division of Criminal Investigation Drug Task Force for Southwest Wyoming (SWET), which is partially funded by a federal HIDTA Grant.

Investigations are focused on drug trafficking organizations and individuals who are bringing drugs into Southwest Wyoming and the local community. This also includes highway interdiction and Clandestine Laboratories.

SWET works with the local and Federal Law Enforcement Agencies because many people who commit crimes are involved in drug activity. Information provided by these agencies assists investigators in cases which result in arrests.

Known as the "club drug", Ecstasy is a popular drug with the teenagers, especially at raves. Ecstasy is most commonly seen in pill form and has numerous names.

Some of the more popular Ecstasy pills include Blue Butterflies, Pink Mario's, Hugh Hefner's, Yellow Ferrari's, and Green Euros. Ecstasy is fairly inexpensive, making it easier for kids to get their hands on.

Several websites that can be viewed for more information on OTC Medications and Ecstasy are:

Find a Drug Guide for Parents.

If you suspect drug activity going on in your neighborhood please contact the Green River Police Department Dispatch at 875-1400 to speak with an officer. 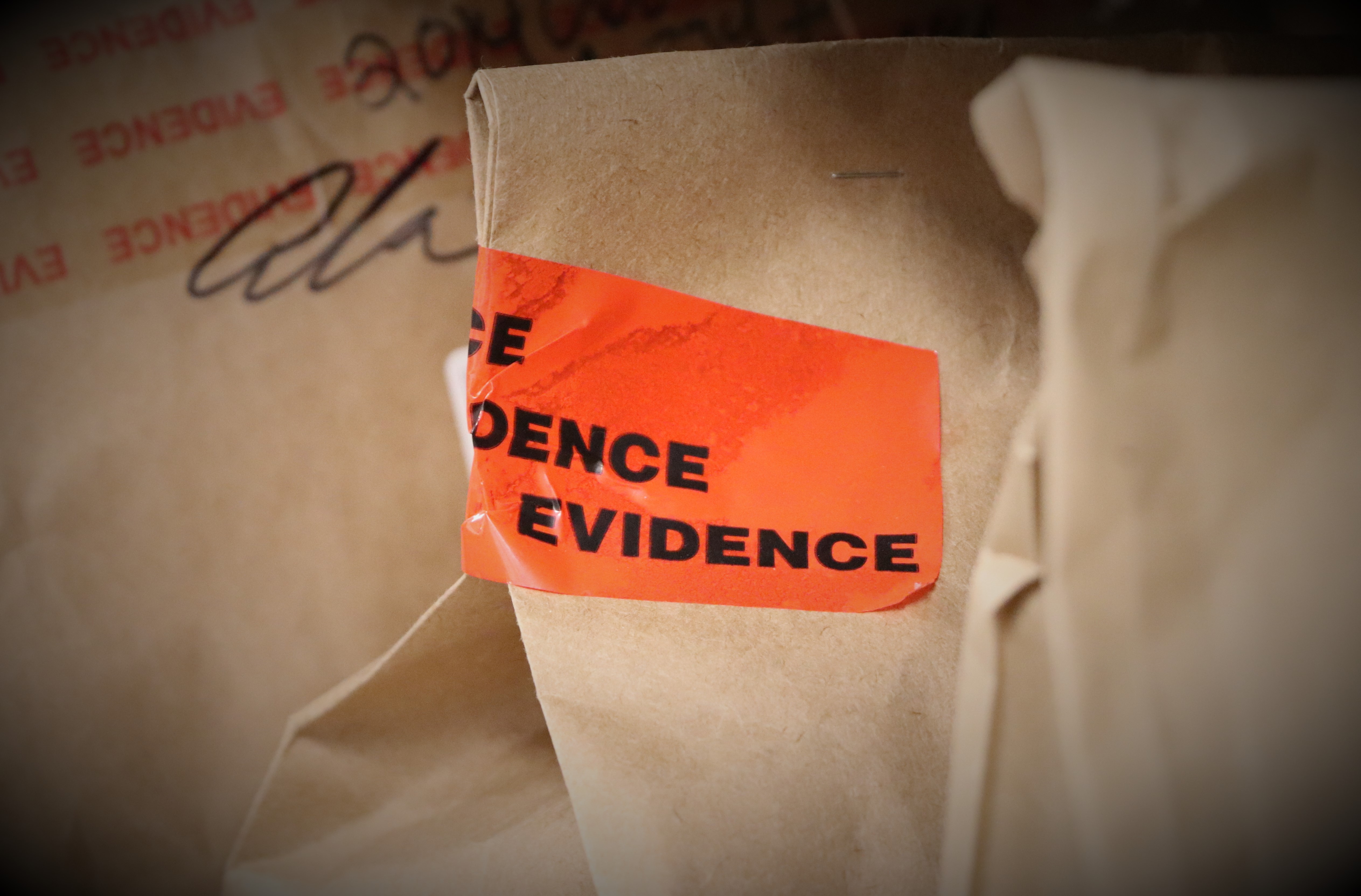 The Property and Evidence unit is responsible for the receipt, documentation, storage and tracking of all evidence, found property and property taken for safekeeping.

The Property & Evidence unit is also responsible for returning property to the rightful owner at the conclusion of an investigation or disposing of such in accordance with Wyoming state statutes and GRPD policy.

The Property and Evidence unit is only responsible for property/evidence collected by the Green River Police Department. If your property was collected or seized by another law enforcement agency (ie: Sweetwater County Detention Center, Sweetwater County Sheriff's Office, Rock Springs Police Department), you will need to contact that agency directly for the disposition of your property.

Below is the information needed in order to release property -

To retrieve property from the Green River Police Department an appointment should be made prior to the request of any property release by calling 307-872-6170. Monday through Friday 9 a.m. to 4 p.m.

The Evidence Technician can facilitate the process for the release of property, but does not have the authority to determine what property can be released or when it can be released.

Photo identification is required for the return of your property.