Each year with the onset of winter, the citizens of the City of Green River begin to prepare and brace for the snow, wind, and cold. At the Public Works Department, the Street Division prepares for winter by fitting trucks and equipment for Snow Operation to control snow and ice. Often, many questions arise this time of year concerning our Snow Operations. To answer some of the questions and to better serve our customers, we have prepared this information on the City of Green River Snow Operations.

The Goal of the Green River Snow Operations is to:

A Snow Removal Plan has been prepared and adopted for the City. Within the plan are several objectives, including:

PRIORITY STREETS
It is physically impossible to control snow and ice accumulation on all streets simultaneously, therefore, a priority system for plowing and sanding the streets of Green River has been developed. To ensure the passage of emergency services vehicles and the majority of the traveling public, our priority street list consists of many of the main roads throughout the City.

Residential streets are cleared primarily during working hours, depending on conditions. 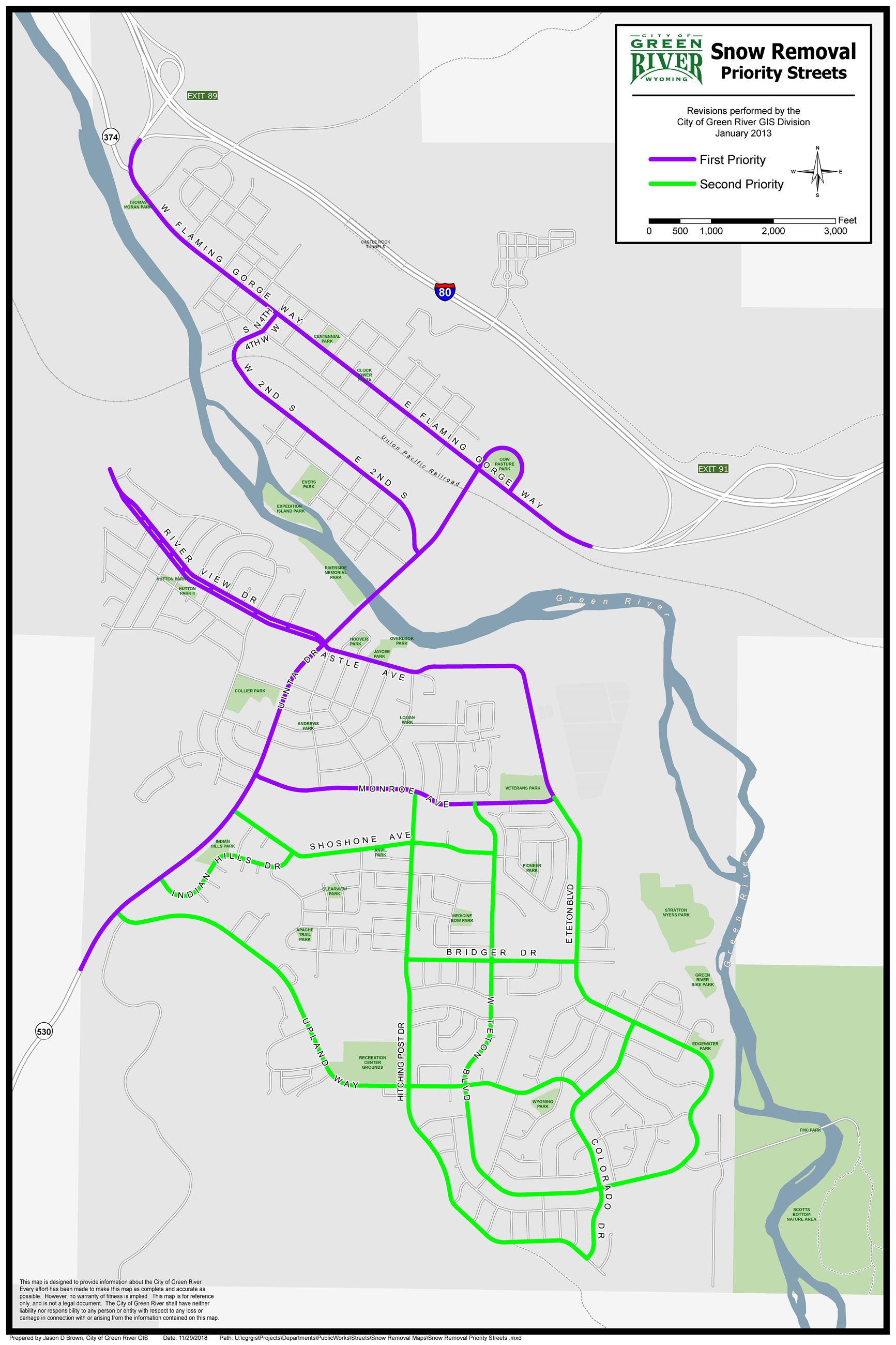 The Streets Division also has a small snowplow for narrow streets and a loader and grader to aid in cleanup efforts.

For very large storms and emergencies, the City may mobilize additional equipment or contract with private construction companies to plow and remove snow.

It seems like we're always plowed last. Why can't we be first sometimes?

That's a good question. Our drivers tend to begin and end in the same places. We try to reverse the order if conditions permit.

I'm very concerned about our environment: Why don't you do more plowing and eliminate the use of all the sand and salt?

Plowing and sanding don't serve the same purpose. You need to do both for large snowfalls. Sanding and salting are much more economical for small amounts of snow.

Why do the plows go so fast and throw snow on my sidewalk?

Plows need to go a minimum speed to throw the snow off the side. We ask our drivers not to throw the snow any further than necessary. In some cases, however, the sidewalks are too close to the curb to avoid getting snow on them.

Why not plow the snow to the center of the street?

Plowing snow to the center of the street could be very hazardous to the traveling public. Traffic flow would be restricted by eliminating a portion of a lane and this practice can also create sight obstruction for low vehicles. Streets need to be cleared for emergency vehicle access and narrow residential streets already limit their access.

Placing snow in the center of the street would create several safety and liability issues:

Why can't the City remove the snow from my driveway entrance?

A significant investment in equipment and an increase in the snow removal budget would be required to remove snow from over 4,000 driveways in the City. Our equipment plows snow to the right-hand side of the street, and we rely on the residents and businesses to remove the snow from their driveways. This service is the most economical for taxpayers.

We recommend waiting and clearing your driveway after city plows have passed through your street. If it is a significant snowfall, the snowplows will probably be back to make multiple passes.

Please remember when shoveling your driveway to always pile the snow on the left side of the driveway (facing the property). This will give you a better line of vision of the oncoming traffic and when our plows go by, we will not drag your shoveled piles back into your driveway entrance. Always keep spring thaw in mind when selecting where to pile the snow.

How can I help the City with snow and ice removal?

One of the main obstacles for equipment operators is parked vehicles and recreational vehicles on the street. Once the snow starts, removing your vehicles from the street, cul-de-sac, or alley until the roads are cleared will allow the operators to do a much better job.

Residents are reminded to plow sidewalks adjacent to your property and to please plow snow from the sidewalk and driveways to front yard areas where possible. Snow plowed onto roadways reduces road snow storage areas and creates a hazard for motorists. Cleaning the gutters out as well as the sidewalk can be beneficial when the snow starts to melt to prevent ice from backing up on sidewalks and driveway entrances.